This articles covers a TwinSteer variant in SnowRunner; for XD variant of the same truck in MudRunner - American Wilds see: Western Star 6900XD

⚠️WIDE LOAD incoming!⚠️
Introducing the Western Star 6900 TwinSteer! Get ready to crunch some snow in this rigid frame powerhouse.

The long flatbed that comes with the truck can be used to carry up to 4 load points.

A gargantuan truck, the Western Star 6900 TwinSteer is a massive behemoth that is the definition of a cargo hauler.

Despite its standard RWD setup and extreme length the TwinSteer is surprisingly effective in mud thanks to its large tire options and Differential lock alone. Even without suitable tires or the differential lock engaged it can still be managed in the hands of a skilled driver. Its AWD upgrade added in Phase 1 only further strengthens its capability offroad and nearly unstoppable in practically any kind of terrain.

The TwinSteer uses 2 steer axles as opposed to 1 on most trucks. This gives it a good turning radius relative to the extremely long vehicle length. The vehicle's large fuel tank also makes it very effective for long distance hauls which combined with its large storage space for cargo makes it one of the best haulers in the game.

The TwinSteer does have some disadvantages that can cause problems for it on some routes. Even with 2 steer axles its turning radius is still extremely poor making tight turns extremely difficult and U-turns nearly impossible on some roads. Its weight distribution is also somewhat poor causing the truck to flip on even small hills or rough terrain.

The strength of this vehicle lies in its ability to haul four points without the use of a trailer. Despite the massive length, some players may find it easier to handle than a standard truck and a 5th wheel trailer. It is also more suited for off road haulage than most cab and articulated trailer set-ups. 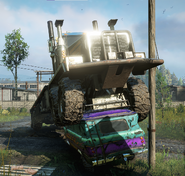