The GMC MH9500 is an old school staple of highway trucking. It's durable, has a high suspension and enough power to go off-road. With the right tires and engine setup, this workhorse can handle a forest road with ease.

The MH9500 stands out from other highway trucks because it is the only highway class truck that can be equipped with a differential lock and all wheel drive.

The MH9500 can find success in various roles, primarily as a highway truck which it was originally built for or a off-road hauler when proper upgrades are found. Without any upgrades, the MH9500 is mediocre at best. It is a more powerful vehicle than the CK1500, but is still unable to successfully travel through mud. Its differential lock provides a major improvement in mud along with a suspension lift but deep mud will still leave this truck in a tough situation it may not be able to handle. Once AWD is located it becomes comparable to some off-road class trucks like the Freightliner 114SD and proves itself capable in rough terrain. Its biggest strength however is its impressive top speed at around 54 miles an hour. This makes it the fastest highway truck in the game and one of the fastest trucks overall.

The MH9500 has a average fuel tank size at 240L. Its relatively light weight and fuel efficient engine selection provide it with an impressive range before refuels are required making it a decent choice for tasks where fuel is not available.

Overall the MH9500 can handle some rough terrain with effort but for the most part truly thrives on paved roads and away from mud until its upgrades are located. 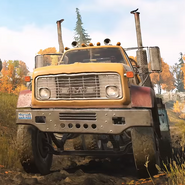