The Antarctic is designed to excel in the deep freeze conditions of the North. Outfitted with special armored wheels, a unique fuel-efficient powertrain, and an impressively sizeable fuel tank. It can downright ignore almost any obstacles unfortunate enough to stand in its way.

The Azov 42-20 Antarctic is based off the Kamaz Arctic 6345, a specialized off-road articulating 6x6 designed for arctic expeditions. The 42-20 sports a redesigned grill that features more air intakes for the cooling system. The 42-20 headlight design are larger overall and feature redesigned guards on them to protect against collisions. The 42-20 cab overall also appears to be a bit wider than the 6345's cabs as its fenders are not as prominent, the doors also appear to have sharper curves. Lastly the most prominent change is the design of the sleeper behind the cab, the 42-20 sleeper appears to be a bit larger in its height and length. The cabin also has a more streamlined appearance with some curves whereas the 6345 cab is a cube shape.

The 42-20 along with its similar American counterpart the Caterpillar 745C are among the most capable vehicles in the game. Though its large size can prove to be troublesome at times, it possesses one of the largest tires in the game (second only to the Caterpillar 770G), AWD, and a differential lock giving it the perfect combination for tackling any kind of terrain. Unlike its similar American counterpart, the 42-20 is capable of supporting a flatbed or sideboard bed making it far better suited for hauling cargo. However it can not equip any kind of service body or fuel tank add-ons which limits its potential as a recovery vehicle.

One of the 42-20's biggest and most ironic drawbacks, is its very poor handling in regions like Alaska or the Kola Peninsula due to its large tires lacking any kind of traction on ice and it having no options for any kind of chained tires.

Like the CAT 745C, the 42-20 uses articulating steering meaning the vehicle is "split" into 2 halves. When turning the 42-20s front half will turn rather than the wheels. This steering system while tricky to get a hang of can be useful in the hands of a skilled driver.

Due to the vehicle's tall height it is a bit more prone to falling over compared to the 745C but it has higher ground clearance allowing it to traverse deeper mud. Furthermore, it can traverse deep water while almost entirely submerged with its snorkel equipped.

A 42-20 Antarctic as seen in a pre-release image 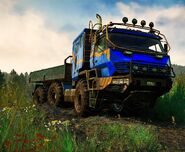