What's on your mind?

Can you please make some pickups where you can carry cargo?

It can require a spechal mission, but please add in cargo beds for some pickups, like the loadstar. heck, you would just need to add a small sidebord bed to it's upgrades, and that would be fine.

Please tho. I want scouts to have a use, as their quite fun to drive, yet, they have no porpouse.

Is it just me, or is this mission too easy. the truck can prity much get out on it's own, and you only need one truck or so to do it!

I think they should add a season about mega mining. Like ultra class haul trucks.

The ultra class truck we (problabaly) all know about. ^ the cat 797f

I'm thinking of trading FS19 for Snowrunner on my Mac OS. Should I get it and more importantly can my system handle it?

Ok, so I have been thinking for the past year or so, and i think the next place they add should be oregon, or somewhere simular, like washington or norther calafornia. the resons why they should do oregon include:

1, lots or forsts, mud, and a large logging industry

2, this is how you could add componys like subaru or honda

3, there are many trucks here

4, you could have something like a camp (like BSA camps. that would be fun to deliver to or something)

5, you have maine. there is portland maine. PORTLAND OREGON! you could do a joke about that.

So i recently started playing sr in my xbox one and when i played a mod map (lake coap) my game crashes after playing there for a while. what makes this haopen

Is this some kinda sick joke? 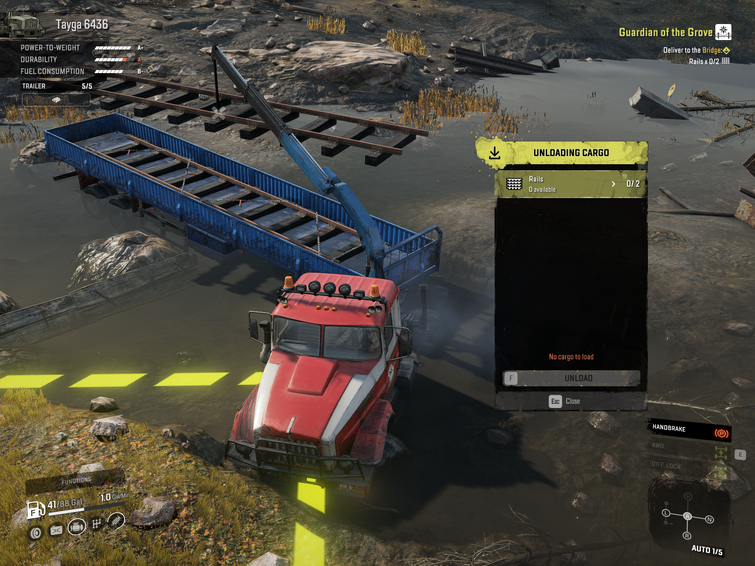 On the island connected to the cabin crafting zone there is a GMC brigadier, it isn't listed on maprunner.

You can change to it but only if you have the DLC for it. If you haven't got the DLC you can still tow it back to the garage as decoration.

I was reading about the deary longhorn and it said it has the second-largest fuel tank in the game, I thought it had the biggest so what truck has the biggest

Is there gonna be non dlc vehicles

Hello all and welcome. I made a blog on community central about this but it is now outdated and this is just very interesting.

The beginning times were the very beginning of our Wiki and the person who started all of it was a person named TheRealMU5T4N6. In time of the creation of the wiki on the 10th of February, 2016 to two and half years later in October of 2018 marked the time period of this era, 2 pages and 6 edits were made. The two pages were the main page and the Spintires vehicle page. The main page has been heavily altered due to the other two games in the franchise releasing and all the DLC work done. The vehicle page created has sadly been deleted as with the third game coming out along with 2 DLCs for the first game, we needed to separate our pages so we had room and helped mobile users. There would be 25 more edits made by a user named Reaper11186 at the end of this era around July that kicked off the next era.

In October of 2018, three users named Creamygravy44, Harrison35, and Pinkachu who might I add was a Fandom staff member, made around 120 edits combined but all three dropped off around December, just 2 months after they arrived. This time saw most of our vehicle pages created for MudRunner and SpinTires as well as MudRunner's page be created. February of 2019 marked the end of The Resurgence.

The Golden Age marked when the most users had come on to edit with about 6 users logged to edit. This would be very short though as most of those users would leave at the middle of the age and this age leads to a very dark one. A lot of old pages were made doing this time however.

Starting in October of 2018, (Which is when Nextej joined and I joined a month later) the wiki was down to 2 members from The Golden Age but the wiki gained some new members and added a good bit of info. This isn't too much else to say about this one other than it ended in February of 2020.

This age marks when I had gained leadership rights over the wiki and Nextej had also gained rights. This age would bring about most of our modern information and mark when a new leadership was present since there hadn't been proper leadership since The Resurgence. This age would end on April 12th 2020.

Another admin called BarneyKB would be added to the leadership and form the triumvirate which was the first of its kind as the members of the resurgence fell under rule of Pinkachu more than having a three ruler wiki. Quite a few modern pages were made during this time.

In November of 2020, Churnovisk and The Cherrybomber were officially made staff by myself and this kicks off the age of progress. This era has seen most of our pages reworked and a lot of new ones made. I extend my thanks to Churnovisk and The Cherrybomber as they singlehandedly brought this wiki into an age of great information. This is the age we currently reside in a probably will for a long time unless something drastic changes.

Hopefully this post shines light on this wiki's past.

Hello everyone, phase 3 is finally here on console and PC! It features 2 new maps set in Wisconsin, 3 new vehicles, logging, new add-ons, customization, tasks, and more. For a list of changes and additions please check out the official update announcement posted on the Focus Forums!

Id also like to apologize for the lack of updates posted about the PTS updates in this forum. But many of the changes have been somewhat minor with the exception of a few major vehicle tweaks and additions so many of the PTS updates were not notably interesting or exciting.

Hey everyone, please make sure when uploading images to give the image a relevant name to make keeping track of them easier. As an example lets say you have a good image of a rear view of the scout 800 and want to upload it, then the name for the file should be something along the lines of scout800rear instead of the original file name. Doing this makes navigating and locating images far easier and is greatly appreciated!

The SnowRunner PTS has been updated to version 12.1, the new update is primarily minor bug fixes with the main issues addressed being a game crashing error at the start screen, a wheel clipping issue on the Paystar 5600TS, and some UI improvements in loading zones. A link to the list will be provided below. Stay tuned for any updates!

In a recent comment from the development team in the official snowrunner discord, the developers have confirmed that the phase 3 pts is set for release by the end of december 2020. Phase 3 will likely bring 2 new maps in wisconsin and 1 confirmed truck, the BOAR 45318. Stay tuned for more updates in the upcoming week!